201 Squadron to be reformed! 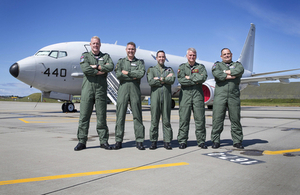 The aircraft’s key role will be to help protect the UK’s submarine-deployed nuclear deterrent and its two new aircraft carriers.

The UK Government is investing £3 billion over the next decade in its Maritime Patrol Aircraft capability.

Our nine new Poseidon aircraft are part of our plan to monitor and deal with increased threats to our country. They can operate at long range without refuelling and have the endurance to carry out high and low-level airborne maritime and overland surveillance for extended periods, helping keep us safe. The P-8A aircraft will allow us to work more closely with our allies, improve our surveillance coverage and will provide value for taxpayers’ money.

Today is an important milestone in the P-8A Poseidon programme which will bring to the Royal Air Force an unrivalled maritime patrol capability. The advanced state-of-the-art sensors aboard the P-8A will provide global protection to UK, NATO and our Allies’ submarines and warships, and enhance and complement the UK’s standing search and rescue responsibilities.

It is also a great pleasure to welcome back 120 and 201 Squadrons. Both have long and distinguished records serving in the maritime role and together they will help forge the next generation Royal Air Force.

Poseidon will add to the UK’s surveillance capabilities and is designed to conduct anti-submarine and anti-surface warfare, search and rescue and intelligence gathering. They can carry torpedoes and anti-shipping missiles.

As a leading members of NATO, the UK Ministry of Defence has already signed agreements with the US and Norwegian militaries to cooperate closely on operating their P-8A aircraft across the North Atlantic.

With the first aircraft due to arrive in the UK in 2020, the RAF has maintained its Maritime Patrol Aircraft skills by embedding aircrew within MPA squadrons of Australia, Canada, New Zealand and the USA.

Poseidon will bring wider economic benefits with an additional 400+ service personnel to be located at RAF Lossiemouth, where £400m is also being invested in new support infrastructure for the aircraft.

As the Poseidon P-8A is based on the Boeing 737, it will help support several hundred direct UK jobs, and create opportunities for UK firms to bid for training and support contracts.